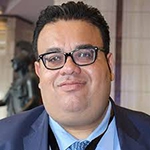 Dr. Hantera was educated In Faculty of Medicine Tanta university -Tanta Egypt, where he was graduated in 1999. After completing his internship and subspecialty training in pulmonary Department (2001-2004), he pursued additional training in Italy, he started at Department of Allergy and Respiratory diseases San Martino hospital Genova Italy (2007-2008), where he Finished his MD degree. He also worked in Unit of Interventional Pulmonology at (2009), where he got his expertise in the field of Intervention Bronchology.

While in Egypt, Dr Hantera pursued an academic career at the Faculty of Medicine, Tanta University, where he holds the position of Assistant Professor of Pulmonary Medicine since 2014. He also served as Vice manager of Tanta Educational Hospital (2013-2015).

He is a member of numerous regional and international organizations, including the European Respiratory Society (ERS), American college of Chest physician (ACCP), World association for Bronchology, Egyptian Scientific Society of Bronchology (ESSB).

Dr. Hantera participate in many clinical trials in the field of pulmonology also, participate in research projects funded by STDF (Genetic Signature center for fostering next generation translational cancer research)