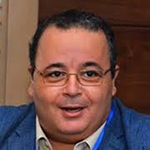 A Professor of Pulmonary Medicine, Ain Shams University, Cairo since 2015.

He completed his training with fellowships at Research Institute of Diagnosis and Treatment Early of Lung Cancer (RIDTELC), Germany (2000-2002). He also received a second Doctor of Medicine Degree (Dr. med.), from Essen University (2002), Germany.

He has a Fellowship from the American College of Chest Physicians (2008).

He served as the Director of Respiratory Intensive Care Unit, Ain Shams University Specialized Hospital, Cairo, Egypt (2005-2006). Also, he is the Co- Founder and Member of the Board of directors of the Respiratory Care Centre (RCC) in Cairo since 2006 and has an active Pulmonary Medicine private practice clinic in Cairo.

Prof. Madkour is an active professor teaching both medical students, residents and postgraduate students and made presentations at numerous professional conferences, seminars and workshops and he is a skilled handed active bronchoscopist. He has made contributions in research to the specialty of Chest diseases with nine international publications, 27 national publications and more than 30 master & doctor degree supervised thesis. In addition, he participated in many clinical international research trials.

He is a member of numerous regional and international organizations, including the European Respiratory Society (ERS), American College of Chest Physicians (ACCP), World association for Bronchology, and board member at the Egyptian Scientific Society of Bronchology (ESSB) since 2003.

He received certificate of merit from Ain Shams University International Medical Congress in 1994 and 1997 and award from Egyptian Medical Syndicate in 1998 and 2003.