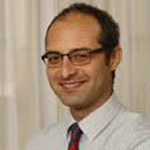 Ahmed Gharib is a respiratory physician and researcher at the National research center in Cairo, Egypt. After finishing his Baccalauréat from the prestigious Collège de la Sainte Famille des Pères Jésuites in Cairo, he was enrolled at the Faculty of Medicine of Ain Shams University, where he later completed both his Masters and MD degrees in Pulmonology.

In 2011, Dr. Gharib received a one year scholarship to study the Respiratory Disturbances during Sleep in Palermo, Italy. Afterwards, he moved to France where he worked at the Centre Hospitalier Intercommunal in Créteil. During his stay in France, he obtained an additional diploma in Respiratory Medicine from the University of Paris 12 and successfully completed his diploma in Thoracic Oncology from the University of Paris Descartes.

Subsequently, he moved to Denmark for a short term to start his research fellowship of the European Respiratory Society, studying the role of Circulating Tumor Cells in lung cancer screening and follow up.

Additionally, he is certified by the European Sleep Research Society as a Somnologist – Expert in Sleep Medicine after successfully passing the 9th ESRS examination of the certification in Sleep Medicine.

Dr. Gharib is a member of the European Respiratory Society, the European Sleep Research Society and the Pan African thoracic Society. His major clinical and research interest is in airway diseases, interventional diagnostic procedures, sleep related breathing disorders, non invasive ventilation and in finding novel biomarkers and therapeutic targets for these diseases.