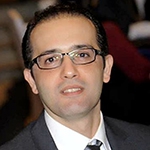 Dr. Shoukri was educated in Jesuites Frensh school before attending Ain Shams School of Medicine, Cairo Egypt, where he was graduated in 2001.

He also worked in Department of Thoracic Oncology, Pleural Diseases and Interventional Pulmonology at Hôpital Nord in Marseille (2010-2012), where he got his expertise in the field of medical thoracoscopy and pleural diseases working with Professor Philippe Astoul, and he finished his Diploma in Medical Oncology, focusing on Thoracic oncology field. He also participated in a research fellowship program in Pitié Salpêtrière hospital in Paris (2014-2015).

While in Egypt, Dr. Shoukri pursued an academic career at the Faculty of Medicine, Ain Shams University, where he holds the position of Assistant Professor of Pulmonary Medicine since 2017. He also served as director of the Pulmonary Intensive Care Unit at Ain Shams University Specialized Hospital (2012-2014).

He is a member of numerous regional and international organizations, including the European Respiratory Society (ERS), Société de Pneumologie de langue Francaise (SPLF), World association for Bronchology, and board member at the Egyptian Scientific Society of Bronchology (ESSB).