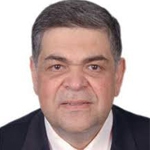 (Counselor of the American University in Cairo & Former Minister of Health and Population, Egypt)

Professor Ashraf Hatem is the Counselor of the American University in Cairo (AUC). He is in charge of the main liaison between the Egyptian authorities and AUC. Professor Hatem works to develop good relations with the Supreme Council of Universities and to facilitate the implementation of the accreditation process for all academic degrees. He enhances contacts with the national universities to encourage the engagement and collaboration between them and AUC.

Professor Hatem was Egypt Minister of Health and Population in 2011. He was the Secretary General of the Supreme Council of Universities in Egypt (SCU) from 2012 to 2017. During his role as a Secretary General for the SCU, Professor Hatem led a reform team that worked with other regulatory bodies and universities to upgrade and reform the higher education system via initiating an independent body for its financing and regulation in the name of HERFA (The Higher Education Regulatory and Funding Agency). He was a member of the Supreme Council of the Pre-University Education, which initiated the reform plan for Egypt’s new system of school education.

He was formerly a Consultant to the Minister of Higher Education for Universities Hospitals.

Professor Hatem was also a Consultant to the Minister of Health in the area of Chest Diseases and Tuberculosis. He has been chairing the Board of Binational Fulbright Commission in Egypt since 2013.

Professor Hatem was the Director General of Cairo University Hospitals (2005-2011). He was the Director of the Mubarak-Kohl Institute of Nursing. He is a member of numerous professional societies and is a Fellow of the American College of Chest Physicians and the Royal Society of Medicine.

Professor Ashraf Hatem acts as a reviewer for Chest in the official journal of the American College of Chest Physicians.

He is a Professor of Pulmonary Medicine at Kasr Al Aini Faculty of Medicine in Cairo University and is a holder of MD degree in Chest Diseases, M. Sc. in CHEST and MB, Bch from Cairo University Egypt and earned his E.C.F.M.G. from the USA.(Counselor of the American University in Cairo & Former Minister of Health and Population, Egypt